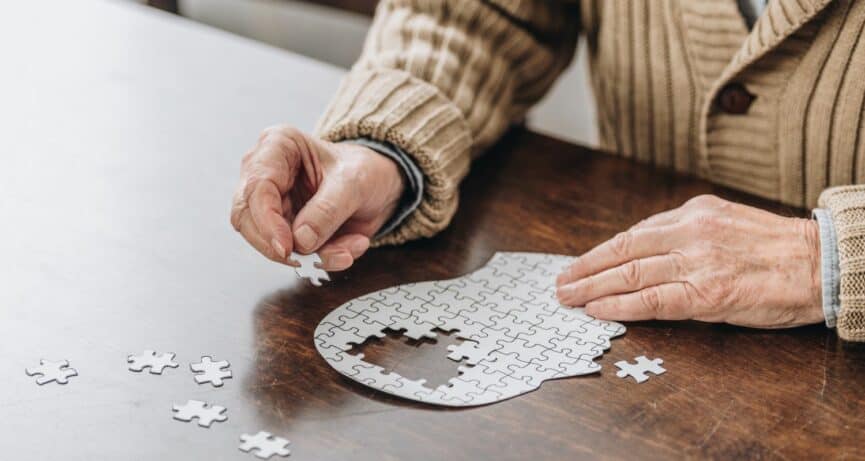 As we age it’s common for some slight memory loss to occur. You may find yourself forgetting your keys or simple details. The peak of cognitive health starts to gradually decline in your mid 40’s. However, if you are experiencing hearing loss, cognitive decline can happen much faster.

We collect sound with our ears, however, it’s also their job to send those sounds to our brains. In our brain, we can process speech and identify sounds. Sensorineural hearing loss occurs when the tiny hair-like cells housed in the cochlea become damaged. These cells are called stereocilia and they can become damaged, due to loud noise, impact to the head, infection, exposure to certain chemicals, or due to issues with blood supply due to chronic diseases such as diabetes and hypertension. This can impede the delivery of certain tones, pitches, and sounds to the brain and leads to different degrees of hearing loss. The brain must struggle constantly to fill in these gaps, which can put it under quite a lot of stress.

When we struggle to hear it can be exhausting. Fun social interactions between friends and family can suddenly feel draining. At work, complications due to misunderstandings can lead to coworkers and employees relying on you less, as mistakes become all too commonplace. This can affect someone’s self-esteem as all social aspects of their lives are rife with rifts and confusion. It also puts quite a lot of stress on the brain. People are likely to avoid social interactions as often as they can, giving way to loneliness and social isolation.

Many studies have found an association between untreated hearing loss and dementia. Dementia is a grouping of neurodegenerative diseases, classified by the loss of at least two brain functions, such as memory, social skills, and the ability to follow a list or complete daily tasks. As it progresses, it makes it impossible for the affected person to remember and complete everyday tasks.  It can be just as devastating for families of those affected as they are left with the financial stress of providing around-the-clock care for their loved ones. Understanding how hearing loss can contribute to a higher likeliness of developing dementia further on is just one more reason to take a hearing loss seriously.

Studies on How Hearing Loss Changes the Brain

Not only does hearing loss stress the brain’s compacity for comprehension, but it may lead to atrophy as well. Jonathan Peelle, now at Washington University in St. Louis, led a study focusing on older adults who underwent brain scans while listening to sentences of varying complexity. In addition, the participants took tests that measured “gray matter,” the regions of the brain involved in muscle control, and sensory perception such as seeing and hearing, memory, emotions, speech, decision making, and self-control.

The researchers found that the neurons (brain cells) in people with hearing loss were less stimulated when they are focusing on complex sentences and that they had less gray matter, specifically in the auditory areas of the brain. Researchers believe that these effects may accumulate with time.

Study on the Hearing Dementia Connection

A recent July 2021 study uncovered shocking results for those who struggle to hear speech in noise. Researchers found that over an 11-year study period, those with hearing in noise complications were more likely to develop dementia than those with normal hearing.

Meanwhile, a separate study from Johns Hopkins examined cognitive impairment scores over six years for nearly 2,000 seniors and found that those with hearing loss had a noticeably higher rate of decline. While at the start of the study, all participants had normal cognitive abilities, by the end, those with hearing impairments with 24 percent more likely to have standard cognitive “impairment” than those with normal hearing.

While there is no cure for hearing loss, hearing aids can help amplify the sounds around you. Based on your hearing exam, they can be programmed to amplify only the sounds you struggle with allowing you to hear the rest with your existing hearing. This relives a lot of strain and stress on your brain. To find out more, schedule an appointment for a hearing exam with us today.