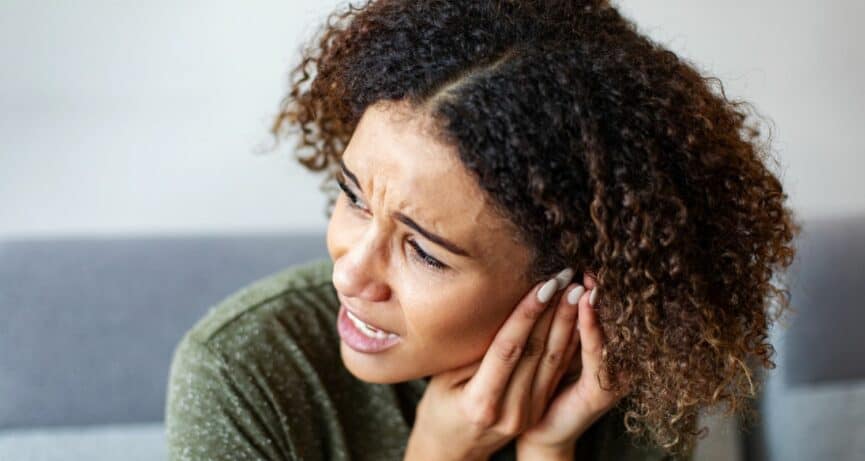 Do you ever find yourself in true peace and quiet only to be confronted by a ringing in the ears that won’t quit? It may start as a buzz, hum, roar, or phantom music, but it can make it hard to concentrate during the day and often keep you up at night. If this is you then that is the sound of tinnitus, a condition that affects 50 million people in the US. While for the majority of people, symptoms come and go, 20 million people, report chronic and burdensome tinnitus, and 2 million report tinnitus so severe that it feels debilitating. No matter what degree of tinnitus you have, we have a few tips to better understand and manage your tinnitus symptoms

No one knows exactly what causes tinnitus; however, the most popular theory is that it is connected to damage to your inner ear. While hearing loss and tinnitus don’t always come as a pair, 90 percent of people with tinnitus, report hearing loss as well. The connection may be around tiny hair-like cells in the cochlea of the inner ear. These cells, called stereocilia are responsible for transforming audio waves into electrical pulses which are sent to the audio cortex in the brain where sounds are identified and processed. When these cells become damaged due to a wide range of causes such as exposure to loud sound, impact to the head, infection, certain medications, or medical conditions such as diabetes and hypertension they can become bent or destroyed, leaving an individual with permanent hearing loss. The stereocilia which are damaged often send a sort of unintentional feedback to the brain which is perceived as a symptom of tinnitus.

Finding a Solution to Your Tinnitus

What works for one person to address tinnitus may not for someone else. It’s important to try options until you find the treatments which work best for you. Here are a few popular treatment options:

Pay Attention to Your Tinnitus

When tinnitus comes on try to think about your actions before. What did you eat? how are you feeling? What time of day is it? Everyone is affected by tinnitus differently, so paying attention to what may be triggering yours is the first step in developing a treatment plan. Monitor the foods, drinks, and medications you take when your tinnitus is the most inescapable.

As if you needed one more reason to quit smoking, smoking can restrict blood flow by constricting blood cells throughout the body, including the cells of the inner ears. Studies show that smokers are 70 percent more likely to acquire some type of hearing loss compared to non-smokers, and with hearing loss often comes tinnitus.

Similarly, you may love alcoholic beverages to celebrate now and then but along with caffeine, too much has been linked to higher personal reports of tinnitus. While no solid connection has been made it’s believed the connection may be due to the levels of stress that these beverages put your body through.

Tinnitus is perceived by the person affected which means that how you regard your symptoms can manage your symptoms. However, this is much easier said than done. It’s believed that stress increases the risk of tinnitus as when it becomes perceived a stress response centers it in the center of consciousness. Meditation is an ancient practice in which you are asked to simply focus on nothing but being. Also, much easier said than done, meditation takes hours of practice as you fight the temptation to think of your appointments later that day, an itch on your neck, or calling a friend. Let all the distracting thoughts of the day slip away and when you achieve true concentration and oneness many find that the frustrating buzz of tinnitus slips away as well.

The sounds of tinnitus can follow you everywhere, but if you cover them up with another sound it often helps tinnitus symptoms become less front and center. At night many enjoy quiet music or a white noise machine to block out tinnitus. Today, many hearing aids offer tinnitus masking features that allow you to focus on the tasks at hand throughout the day without a buzzing distraction.

While the two conditions aren’t always connected, struggling to hear during the day can be stressful and any stress in your life will often increase tinnitus symptoms. If you have tinnitus there is a good chance you have hearing loss as well. Schedule a hearing exam today and we can help you find the best solution for your tinnitus and any hearing issues present.